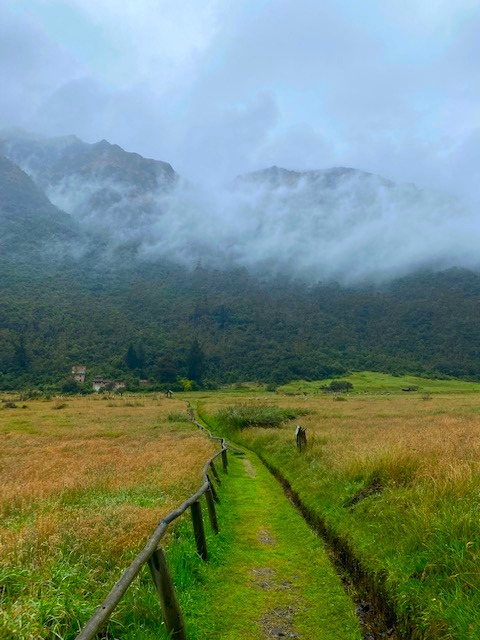 Cuenca Ecuador is a place many people have never heard of, or even thought of visiting. In fact, Cuenca Ecuador is a place where many ex-pats and retirees go to seek a better life and see what else is out there in the world. In this article, we will cover all of our personal experiences In Cuenca Ecuador. We’ll also cover why Cuenca might need to be higher on your priority list for places to work abroad or travel to.

Shout out to my dentist for giving us the inside scoop on Cuenca as six months ago we had no idea it was even a worthwhile location to go to. Fast forward and we just got back from a two-week vacation out there and have learned many things which will be shared below. Here are some of the things we learned in Cuenca Ecuador and why it’s at the top of our list for the near future in regards to living abroad.

One of the things that shocked us the most about Cuenca Ecuador is the convenience of the country in the city itself. We came from Houston Texas and truth be told there’s not much to do within a short walk of one location. Houston is a big city so it’s common for us to drive 45 minutes to want to do one thing going from one side of the city to the next.

We did not have that problem at all in Cuenca Ecuador. Most of what we wanted to see were within a 20-minute walk from downtown where we were at any point on the map. There was an abundance of restaurants, beautiful architectural buildings, sites to see, and even parks. If for whatever reason, you are unable to walk for about 20 minutes, you could easily take a taxi and you can get to any part of Cuenca Ecuador in about 10 minutes.

The next really nice thing about Cuenca Ecuador was there on American time zones. So for us being from Texas, there was no adjustment at all to our daily schedules as whatever time it was in Cuenca, it was the exact same time in Houston. So there was no “jet lag“ on our end! That made adjusting to the city a breeze!

Next up was the currency. One of our favorite parts was that they are under the dollar. So no need to go to a bank to exchange your money for another country‘s currency, everything is done in dollars. The only adjustment we had to make on that end is paid cash much more than we are typically used to. We are used to paying with our chase credit cards to back up travel points to make flights and hotels more affordable.

But we didn’t run into any issues too often as we were able to use our card in about 80% of the places we shopped at. The only exceptions were very select restaurants, Mercados (Farmers Markets), taxis, and flea markets. Essentially everything else was paid by card with no international transaction fees which allowed us to earn points without any fees!

Another really surprising thing that we really enjoyed about Cuenca Ecuador was the people. We brought our 10-month-old daughter on this trip and she was the star of the town. Her little blue eyes and blonde hair had almost every single person that walked by smiling and waving at her. Everyone was incredibly friendly and wanted to say hi to her which made us feel very safe in this town. As common as the phrase is to have Southern hospitality, in our eyes it almost feels forced in Texas.

However, the South American culture but specifically Cuenca Ecuadorians are some of the nicest people we’ve ever met collectively. It’s actually funny to say that we’re not used to that level of genuine happiness towards kids and families overall. We are more used to fake smiles and disingenuine hellos whereas over there they say exactly what they mean which was really refreshing. So for us, we easily understand why many families and ex-pats move out there. The people are incredibly nice and family-oriented which is a breath of fresh air!

Speaking of air, the weather was downright incredible. We understand that it rains pretty frequently in Cuenca Ecuador, but we will take that any day over the blistering heat that Texas gets for about 6 to 9 months out of the year. To go along with the cool air, there is virtually no humidity as well.

That was one of the most pleasant things we experienced while in Cuenca Ecuador. Compared to Texas, Cuenca was a Breeze. For reference, the high for this whole week averages about 103° F.

Over in Cuenca, I may have broken a sweat two times which was after about an hour of carrying my daughter in a kangaroo/front backpack. We would walk all over town with a light jacket and jeans and barely broke a sweat the whole time.

It was completely magical! And it is to be noted that they are seasons are different than Americas since they are closer to the equator. That being said, the Summertime weather. Which was still about 30° lower on a daily basis than what we experienced.

All that to be said, if you do not mind random rain storms, and consistent cloudy days, Cuenca is one of our first choices for all-year-around awesome weather! It’s funny if you talk to enough people, they will gripe about the weather conditions or mention the lack of consistency in the days.

If that’s the price you pay for the town, so be it. It’s better for that to be what you experience and have to wear a jacket/umbrella most places throughout the year than not even want to go outside because it’s either snowing or hot enough to cook eggs on the pavement.

Things To Do In Cuenca Ecuador

Another special treat about Cuenca Ecuador is how much there was to do! We were there for two weeks and probably got through about 20% of the big checklist items in the city. It was a little tough with the kiddo but we were still able to see a vast majority of the city on our daily walks that lasted well over an hour.

One thing we did consistently for our entire stay is we would make it a point to walk by the river that cuts right through the center of The city at least once a day. It was such a calm walk where you can hear the rushing waters splash their way down stream. There were always dozens of people sitting down on the grass either doing schoolwork, sleeping, meditating, doing yoga, and a wide variety of other relaxing things to do on the river.

Not only is there a beautiful and historic downtown, but the river also cuts through the city a few minutes away from the center of the city. Depending on your interests, there’s something for everyone In Cuenca!

And of course, there are countless cathedrals and churches that you can take pictures next to or find a restaurant close to it.We were fortunate to stay right next to the Central Cathedral and never got over how beautiful that architecture is. Just imagine living in this beautiful city waking up every single day to see these amazing structures!

For my wife and I specifically, we are big foodies so we tried a bunch of restaurants and picked a few of our favorites.

One thing we love about dining out in Cuenca Ecuador is you really do get your money’s worth. When you go out to eat, It is common at breakfast to get juice, coffee, bread, your entrée, and a fruit bowl all for under eight dollars.

What About National Parks Nature?

They really know how to give you the best bang for your buck! More on that later! After you’ve feasted and walked near the river and seen all the beautiful cathedrals, head on over to Cajas national Park! There you will find breathtaking views of the Andes mountains showing you how fortunate you are to be in Cuenca Ecuador.

I’m not sure if we will ever get over the fact that those mountains are about a 30-minute drive from this incredibly beautiful city. It’s very easy to spend half a day or even multiple days walking around the mountains and just seeing some incredible pieces of nature.

If there’s one thing to take away from this article it’s this’ Cuenca Ecuador is home to some of the most absolutely stunning and purely breathtaking sceneries that you can find and for the price you pay to experience it all, you will be asking “what’s the catch?”

Another surprising realization is North America is one of the only places in the world where we cut corners on mass food production. This leads to us putting chemicals in in the food to make production costs cheaper as well as make the food bigger. So we learned that everything in Cuenca Ecuador is non-GMO and completely chemical-free from any toxins which typically leads to the food tasting significantly better as well. It’s the way nature intended for us to enjoy food.

Some of the fruits we ate there have never tasted so sweet and delicious. Since there are no chemicals, it brings out the natural flavor in every dish and food that you consume.

Even the junk food is relatively clean as there was never anything we ate where we felt like we needed to take a nap afterwards. And believe me, we ate plenty of food. In North America, we call it the post-McDonald’s hangover where are you feel like you need to unbuckle your pants and take a quick five-day hibernation app in order to recover.

It was quite surprising in Cuenca Ecuador because we would eat a full meal, and we would feel energized to keep going throughout the day. It was a distinct difference in the quality of the food as it was almost a fully clean energy that was put into our bodies that allowed us to explore the entire city without ever really needing to take a break. While it’s common for other countries to do the same thing, it was another positive experience for the Ecuador’s traveling/living experience.

So you’re probably wondering what a city like Cuenca Ecuador ends up costing you to live there. Well for starters, the whole purpose of this blog is to talk about financial freedom and everything related to money. So you better believe we tracked every single expense during our trip there. Here were our findings;

Should You Move To Cuenca Ecuador?

Well it depends on what you’re wanting out of a city! It might be a smaller city than some might be used to. And that might have its pros and cons. For the vast majority of people who want to escape the never ending hustle, this might be for you. Think of Cuenca Ecuador as a breath of fresh air. It’s the long-awaited journey that you never knew existed but will begin a new chapter of your life in.

You could very easily live an incredibly luxurious life for less than $2500 a month. And if you’re worried about healthcare, that might cost around $75 a month many people we met didn’t have a car so when you add up all the costs together, you’re saving money on a car, health insurance, and HOUSING. That in and of itself should save you at least $2000 a month!

Now you’ve got to ask yourself, what are you waiting for? Come see if yourself why Cuenca Ecuador is one of our new favorite places to visit in the entire world!

Have something else you’re curious about in Cuenca Ecuador? Leave a comment below or send us an Email!